VIRTUAL - Beyond the Library: a visit to the Discovery Museum 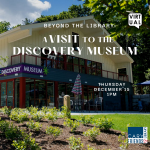 Join Discovery Museum CEO Neil Gordon for a look at Acton’s STEM-focused children’s museum and its accessible outdoor nature playscape and giant treehouse, and learn about what families can expect and enjoy when visiting. Neil will also provide a brief look at the Museum’s recent conversion to 100% on-site generated solar electricity, ongoing free programs and events for families with children with disabilities, and more. Discovery Museum celebrated the 40th anniversary of its founding this year.

Neil Gordon has served as CEO of Discovery Museum in Acton, Massachusetts since 2009. He previously served as Executive Vice President and Chief Operating Officer for Boston Children’s Museum, where he worked for 14 years, and as Budget Director for the City of Boston prior to that. Neil served as President of the Association of Children’s Museums (ACM) from 2008-2010 and was Treasurer of the New England Museum Association (NEMA) from 2004-2008. Neil was awarded a NEMA Excellence Award in 2018.

In collaboration with Ashland Public Library.