VIRTUAL - Bill McKibben - What Happened? Lexington as a Microcosm of the Last Fifty Years in America 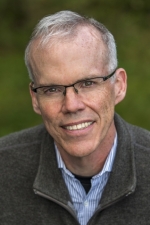 Bill McKibben virtually visits his hometown library and will talk from his new book, The Flag, the Cross, and the Station Wagon: A Graying American Looks Back at His Suburban Boyhood and Wonders What the Hell Happened.

This program is in partnership with the Lexington Historical Society, LexHAB, Lexington Climate Action Network, and the Lexington Veterans Association.

A limited number of signed copies are available for purchase through Porter Square Books. Otherwise, you can purchase copies of the book from their bookstore.

Bill McKibben is founder of Third Act, which organizes people over the age of 60 for action on climate and justice.

His 1989 book The End of Nature is regarded as the first book for a general audience about climate change, and has appeared in 24 languages. He’s gone on to write 20 books, and his work appears regularly in periodicals from the New Yorker to Rolling Stone. He serves as the Schumann Distinguished Scholar in Environmental Studies at Middlebury College, as a fellow of the American Academy of Arts and Sciences, and he has won the Gandhi Peace Prize as well as honorary degrees from 20 colleges and universities. He was awarded the Right Livelihood Award, sometimes called the alternative Nobel, in the Swedish Parliament. Foreign Policy named him to its inaugural list of the world’s 100 most important global thinkers.

McKibben helped found 350.org, the first global grassroots climate campaign, which has organized protests on every continent, including Antarctica, for climate action. He played a leading role in launching the opposition to big oil pipeline projects like Keystone XL, and the fossil fuel divestment campaign, which has become the biggest anti-corporate campaign in history, with endowments worth more than $40 trillion stepping back from oil, gas and coal. He stepped down as board chair of 350 in 2015, and left the board and stepped down from his volunteer role as senior adviser in 2020, accepting emeritus status. He lives in the mountains above Lake Champlain with his wife, the writer Sue Halpern, where he spends as much time as possible outdoors. In 2014, biologists credited his career by naming a new species of woodland gnat—Megophthalmidia mckibbeni–in his honor.

Registration is required to attend this virtual program. If you have not received the link after signing up, be sure to check your spam folder. Otherwise, contact caryprograms@minlib.net with any issues.