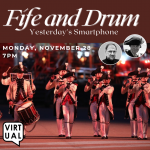 Join members of the acclaimed Middlesex County Volunteers Fifes and Drums in conversation with Jeff Leonard, Lexington’s own Maestro, and Director of Lexington’s Bicentennial Band and Paul O’ Shaugnessy, historian and Officer in His Majesty’s 10th Regiment of Foot, as they discuss the importance of the fife and drum in revolutionary times and today. In a conversation filled with wit and humor you’ll gain a new appreciation for the fife and drum, and enjoy the beautiful music they produce.

This year,  MCV is celebrating its 40th year of performing both internationally and locally. Reputed to be the best group in its genre, MCV has performed numerous times with the Boston Pops, under the direction of both  Keith Lockhart and John Williams. Its travels have taken it “Up Above” to Canada and “Down Under” to Australia, and to many points in between!

Jeffrey Leonard is a Summa Cum Laude graduate of the Berklee College of Music, having majored in Music Education and Jazz Composition and Arranging. He holds a Master’s Degree in Music Education from Boston University. Jeff was the director of bands and the jazz program at Lexington High School starting in 1983, and the Performing Arts Coordinator for the Lexington Public Schools from 2008 until his retirement at the end of the 2017 school year. He is the recipient of the Mass. Music Educators' Distinguished Service Award, the Mass. Jazz Educators Lifetime Achievement Award, the Mass. Instrumental and Choral Conductors Association’s Hall of Fame Award, the Lexington Public School's “Teacher of the Year Award” and the Dr. Michael Fiveash Teaching Award. He is currently an Associate Professor at the Berklee College of Music, and Adjunct Professor at Boston University, and is the co-director of the Youth Jazz Orchestra in the New England Conservatory Preparatory Division. Jeff is a multi- reed player who is found in theatre pit orchestras all around the Boston metropolitan area. He is an in-demand clinician, adjudicator and conductor for regional, state and national music festivals, having conducted All-State Concert and Jazz Bands throughout New England.

Paul O'Shaughnessy grew up in Lexington and while in High School joined the 10th Regiment of Foot, a re-created British infantry regiment, and has participated in the re-enactments of the Battle on the Green ever since.  He eventually rose to command of the Regiment in the first two decades of the 2000's and commanded the British forces in the "Battle Road" 225th event in 2000.  After a 20-year hiatus in Newton, Paul moved back to Lexington in 2004 with his wife Diane and their several cats.  He has served as President of the Lexington Historical Society and on the Tourism Committee, is Board Vice President for the Friends of Minuteman Park, and serves as Technical Director of the Footlight Club in Jamaica Plain.  He currently is Chair of the Town's Historic Districts Commission and is a member of the "Lex250" Commission planning events for the 250th anniversary of the battle in 2025. In his spare time, Paul works as an Engineering Director at a biotech enterprise in Woburn.

If want to hear how beautiful a sound fifes and drums can make—  mark your calendar for the free holiday concert MCV will be giving on December 11 at 2 pm with special guests, Lexington Children’s Chorus and the William Diamond Fife and Drum Corp. For more info: https://www.williamdiamondjrs.org.

This program is made possible by the generous donors to the Cary Library Foundation.