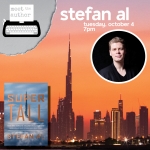 We are living in a new urban age and its most tangible expression is the “supertall” building, megastructures that are dramatically bigger, higher, and more ambitious than any in history. Author, architect, and TED-Resident Stefan Al has worked on some of the largest buildings in the world. He reveals the advancements in engineering, design, and data science that have led to this worldwide boom. Drawing on examples from the past (the Empire State Building, St. Paul’s Cathedral, the Eiffel Tower) and present (Dubai’s Burj Khalifa, London’s Shard, Shanghai Tower), he describes how the most remarkable skyscrapers have been designed and built.

Al explores the ingenious technological innovations in cement, wind resistance, elevator design, and air-conditioning that have made megastructures like the 160-stories-high Burj Khalifa a reality. And he examines the risks of wealth inequality, carbon emissions, and contagion these buildings yield, arguing for a more sustainable, resilient, and equitable built environment for everyone.

Stefan Al is an architect, urban designer, author and educator. Early on, he co-designed the winning design of the 2000-feet tall Canton Tower (2010), briefly the world’s tallest tower. Upon its construction, as a Senior Associate Principal at global firm KPF, he contributed to the design of mixed-use projects and high-rise towers in the US and Asia. He recently started his own design practice and his work has been exhibited in cultural venues worldwide, including the Venice Biennale. In addition, he served as an advisor to various city governments including Hong Kong, a TED Resident, and a professor at Virginia Tech and Columbia University. His latest book, Supertall (W.W. Norton) was commended by The New York Times Book Review as a "thoughtful inquiry into the new generation of skyscrapers."

This program is made possible by the generous donors to the Cary Library Foundation.

Register for this virtual event.