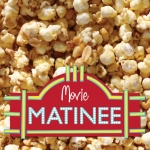 Join us for a Friday afternoon movie in the Teen Room - Who Framed Roger Rabbit?