VIRTUAL - Archaeology: Then and Now 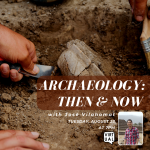 Archaeologists have been interested in the material remains of past human life and activities for centuries. Join José Vilahomat for a talk about the origins of archaeology and its importance to understanding human history.  He'll cover the main concepts and how the discovery and excavation of artifacts has evolved over time.

José Vilahomat's passion for archaeology began when he was growing up in Cuba and continued as he pursued a Masters in Medieval Archaeology from the University of York in the UK. While there he conducted research on the trade between continental Europe and England in the 8th century CE through the use of cultural materials in local archaeological sites. He then gained a deep appreciation for the prehistory of the United States while working in a Cultural Resource Management firm in Arkansas, where he conducted excavations throughout the Southeast and the Midwest. During this time he gained a deep appreciation for the prehistory of the US and Native Americans, especially the Mound Builders of the Southeast. Currently José is pursuing a second Masters in Museum Studies.